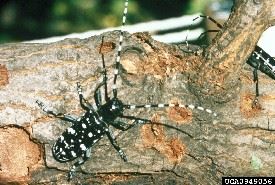 In 2012, the City of Loveland's Tree and Environment Committee took on the sticky task of offering a stance on the USDA's recommendations for the approach towards the elimination of the Asian Longhorn Beetle in the Bethel/Tate area of Clermont County. There was a period of time allotted for public comment. The options ranged from doing nothing, removing all the host trees in the quarantine area and within a half mile around it, a combination of removing trees and treating the trees with a chemical or leaving it to the discretion of the federal government.

The Committee recommended and Council approved by resolution the most aggressive stance, removal of all host trees in the quarantine area and within a half mile. The committee reviewed this issue twice at the behest of council and did a tremendous amount of research and came back with the same recommendation. This recommendation is consistent with recommendations by many who work with trees professionally who spoke with or wrote to the Committee. Here's why:

What to Look For

This bug is particularly fond of maple trees but there are 10 other species it will go after once the maple is gone. This is very different from the Emerald Ash Boring Beetle that goes after only one tree. The ALB is a large bug that will make large holes above branches and place a single egg in each hole. Please familiarize yourself with the picture. If you have limbs falling, look closer for these holes. They cause damage to the inside of a tree, so it will look healthy otherwise, until a storm or strong wind breaks it and it falls.

The bigger point is that it is up to each of us to keep an eye out for this destructive creature. There were a small number discovered in Mason early enough that they were eliminated without having to create a quarantine. If they ever do come to Loveland, even if there is a quarantine area, the sooner they are reported, the smaller the area will need to be. Please be particularly careful with firewood and pallets, common transport for the insect.

The Committee was deeply saddened to see our neighbors have to deal with such a great loss to their community, and would recommend the same if it was ours, for the greater good. The Committee has committed to support reforestation to those support aggressive eradication and encourages others to get involved as well.

Please call 513-381-7180 if you suspect you may have seen one of these beetles or their damage. Please err on the side of caution and do not hesitate. We must be vigilant for the sake of our trees as well as our property and health.