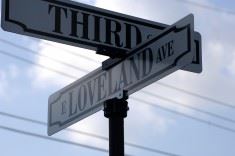 Loveland is a city located within Hamilton, Clermont, and Warren counties in the southwestern part of Ohio in the Greater Cincinnati Area.  Located near exit 52 off of Interstate 275, but also accessible via State Route 48, Loveland is about 15 miles northeast of the Cincinnati city limits.  The City is 5.2 square miles, bordered by Hamilton, Symmes, and Miami Township.

Loveland grew around the railroad and Little Miami River.  We are home to a nationally recognized Little Miami Scenic Bike Trail, which appeals to our very active residents.  The City has plenty to offer in terms of employment, development opportunities, quality neighborhoods, and recreation activities.

The City of Loveland operates according to the Council-Manager form of government, which combines the strong political leadership of elected officials with strong managerial experience of an appointed local government manager. The City Council is comprised of seven members elected from the City at large on a nonpartisan basis to serve overlapping four-year terms. The Mayor is selected from among the Council members to serve a two-year term as presiding officer at City Council meetings and as the official head of the City for legislative and ceremonial purposes. The City Council hires an appointed City Manager to be the City's full-time chief executive officer. Council also appoints the Clerk of Council, City Solicitor and Director of Finance.

General legislative power lies with City Council as the elected representatives of the citizens. Acting as a whole, the City Council is responsible for establishing City goals, adopting an annual budget and passing other ordinances and resolutions necessary for governing the City, as well as setting the direction of City policy. The City Manager is responsible for the overall administration of the City; implementing Council's objectives; preparing the annual budget and administering it after adoption by Council; executing and overseeing all contracts for services and the purchase of materials, supplies and equipment; and keeping City Council advised on the needs of the City.